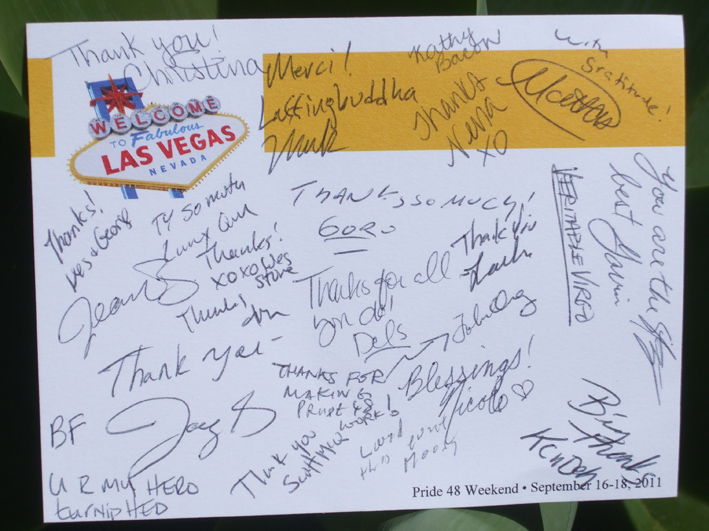 Yesterday’s mail had a surprise: A thank-you card signed by folks attending this year’s Pride 48 event in Las Vegas. I’ve been extremely busy since then, and it’s fair to say I’ve had a few rough days because of it, so this was a very welcome lift!

I take part in Pride 48 because I want to help build something positive that we can all participate in and be proud of. The fact that others get value from Pride 48 makes it all worthwhile, but the fact that folks attending the event in Las Vegas took the time to think of me makes me feel like I got a great big hug. Thank you all!

Related: My own Pride 48 show and a blog post from immediately after this year’s event was all over. 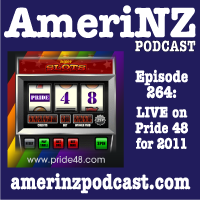 Earlier today I broadcast a live version of this podcast on Pride 48 as part of the 2011 live podcasting extravaganza. I was joined by a special guest—you’ll have to listen to find out who, but let’s just say it’s someone who was an inspiration for me becoming a podcaster. This podcast is unedited, including some Skype-related sound dropouts.

We talked about what the guest has been up to, then we even connected to Las Vegas so members of the live audience could ask questions. We also talked a bit about podcasting.

This was a very fun show for me—and apparently some others, too, and fun is what Pride 48 is all about.

On November 7, we’ll be doing another “State of the Station” to start planning next year’s Pride 48 Live Podcasting Extravaganza. Join us! 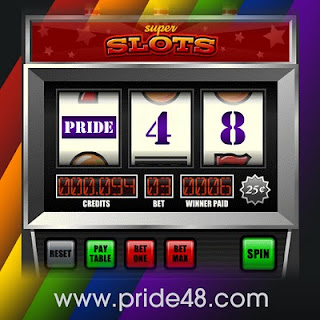 This weekend is the third annual Pride 48 extravaganza of GLBT and GLBT-friendly podcasts. The first two years, we did a 48-hour marathon of live shows streaming out over pride48.com. This year, we have around 20 shows sharing broadcast facilities and a live studio audience at the Luxor hotel in Las Vegas, Nevada.

However, there are several of us who were not able to be there, so I’m coordinating about a dozen shows broadcasting like last year, from their respective studios. My own show will be at 5pm on Sunday, September 18 (Eastern time zone in the Americas, which is 9am Monday, September 19 here in New Zealand).

Overnight (Eastern time) this year we’re re-broadcasting the live shows from earlier in the day instead of trying to find folks willing to broadcast in the middle of the night.

So far, the event has gone well, apart from one non-Vegas show that didn’t happen for some reason. That meant I had to take over the broadcasting duties until the show due to follow was able to start, which happened about 15 minutes early.

It’s a pretty big deal for me, and that’s what I’m up to this weekend.

The artwork accompanying this post was created to celebrate the Pride 48 weekend by Lauren. This is a cross-post, with the same post also on my AmeriNZ Blog.

Each Monday at 9pm (Americas), I host a live show called “State of the Station” on Pride 48. The shows are intended to provide updates and information to people interested in the Pride 48 podcasting event, which this year will be held September 16-19 in Las Vegas, Nevada, USA. We record those shows for people who can’t listen live (we do them live is so that people can ask questions in the chatroom and, hopefully, get them answered right then).

I’d originally planned to post the first Pride 48 “State of the Station” recorded show here, as part of my podcast. However, since I came up with that, the more permanent option became available, so it’s now available directly from the Pride 48 Posterous page. All future episodes will be posted there, too, and you’re welcome to leave comments.

If you want to subscribe to the feed so you get all the future shows, then subscribe to http://feeds.feedburner.com/Pride48 For example, in iTunes, go to the Advanced menu, choose “Subscribe to podcast…” then in the box that opens, paste the feedburner URL (don’t forget the http colon and slashes) and you’ll be subscribed to all future recorded episodes as they’re released.

This show was recorded live on Pride 48, with guests Daniel Brewer, Brother Cinaedus, Veritable Virgo and my husband Nigel.

What does a bad knee have in common with politics? Daniel launches the discussion with that, and we get into a bigger discussion of what’s wrong with US politics, and people’s attitudes toward it, what needs to happen, and more. We even look at some specific races and issues surrounding “Don’t Ask, Don’t Tell”.

I’ll be back for another AmeriNZ LIVE podcast on Pride 48 Thursday, November 4 at 8:00pm EDT (Americas, 1:00pm Friday, November 5 in NZ). I’m going to try a different mic next time—and I’ll start making these shorter, too.

Links for this episode
Daniel is co-host of Live It Up! Podcast
Veritable Virgo’s site
Brother Cinaedus’ post on following Pride 48 Audioboos
The Third Colony – Nigel will be hosting on Saturday, October 30 at 9pm.

Today’s show starts a regular series of live shows on Pride 48 as before. I’ll be alternating weeks (if another podcaster wants to take the other alternating weeks, let me know!). My shows will begin at 8pm Eastern (in the Americas).

This week is something different: A sort of Pride 48 Town Meeting on what we as a podcasting community—podcasters and listeners alike—can do to help prevent suicides among GLBT youth. Dan Savage’s “It Gets Better” Project is a great idea, and UKThom is putting together a video made by Pride 48 folks.

But what about those of us who primarily do audio? What can we do as podcasters and—especially—what can we do using Pride 48? We have the ability to reach many people, what’s the best way to use that?

We also talk about other things that we as podcasters could talk more about, including history and HIV/AIDS. This is a wide-ranging discussion around these issues, and definitely not for podcasters only.

Links for this episode
The Trevor Project
Rainbow Youth (in New Zealand)
The “An Important Announcement” post on this site that I mentioned.
JayT’s Real Men Wear Pink
Veritable Virgo’s site
Ramble Redhead
UKThom’s site
Wes Stone’s Live It Up!

Today’s show starts a regular series of live shows on Pride 48. I’ll be alternating weeks, roughly, with Honey of My Honey Wears Plaid.

I’m out of practice with these live shows, and thought I’d try some new settings. Well, that didn’t work too well, and the sound on the first 8 minutes is pretty awful, until I re-set my settings and the sound is less awful. It took me awhile to sort out the sound problems. This will get better over time.

Anyway (that’s for HatM), we started out talking about disaster preparations and then just followed the conversation wherever it lead. Joining us later was John Ong, who is one of the first gay podcasters back when podcasting began. We were also joined for awhile by Satyr69. After we finished, we continued on talking with John Ong who did a special show about podcasting.

I’ll be back for another AmeriNZ LIVE podcast on Pride 48 this Thursday, September 23 at 7:30pm EDT (Americas, 11:30am Friday, September 24 in NZ). Honey from My Honey Wears Plaid will be back on September 30.

We start by talking about the Proposition 8 ruling. Then we talk about marriage equality v. civil unions. We talk a lot about marriage—what it is and can be. Yeah, Glenn Beck is mentioned. Healthcare creeps into the discussion, and then lots of other stuff about American politics, and Daniel makes lots of good points, TurnipHed makes good points about Canada and Arthur mentions New Zealand: Yeah, you’ll have to listen to get the details.

Thanks to Honey of My Honey Wears Plaid for letting me borrow his time slot (I tried to put the furniture back and vacuum afterwards—sorry about the water stains on the tables).

Be sure to listen to Nigel LIVE on The Third Colony Saturday, 9-11pm Eastern (in the Americas, 1pm Sunday in New Zealand) on qnation.fm. Go to their website for how to listen, or to join the chatroom. The Trivia Game is back!!

Links for this episode
WoWcohol
Live It Up!
TurnipHead’s site
Bears in the City

This episode was recorded live on Pride 48, the 48-hour podcasting marathon, on Saturday, June 26, 2010. Joining me were Nigel, Daniel Brewer and Scotty, the Little Aussie Battler. This is episode is different from my others, and not just because it’s live or 90 minutes long.

I won’t be doing a live podcast on Pride 48 this week. I’m swamped with work and can’t spare the time. Speaking of time, due to the recent seasonal clock changes in the US and NZ, the show now starts two hours earlier NZ time (but same North American time) than it used to. That hasn’t helped!