I begin today with a few notes and updates, especially about the Australian bush fires. Then, a gay NZ politician is moving onto the world stage. The former Prime Minister may, too. The “politicasts” are becoming a separate podcast called “2 Political” (but I’ll still post them to AmeriNZ for awhile, anyway). The posts to Podomatic will end on March 27. Yesterday was the final day of the “Internet Blackout” campaign, and I tell you what that was all about and the development that cancelled yesterday’s podcast. I’ll be posting my two-year anniversary episode on Friday, March 27. 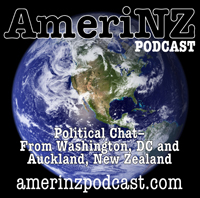 We’re finally back with our first Politicast since January. First up today, we announce the name for the new stand-alone political podcast we’re doing. Then it’s on to the economic stimulus, which President Obama signed into law today. We talk about some of the implications, and Jason also presents his ideas for helping ordinary homeowners. That leads to a talk of banks and the financial markets. Despite it all, we end on a positive note.

It’s been a bit unusual lately, especially the tropical weather in Auckland. But the big news here has been the Australian bush fires. I tell you a bit about that, especially New Zealand’s response. A voicemail lets me talk about schools in New Zealand and also whether it’s easier for GLBT people here than in the US. It’s a multi-faceted episode today!

When I set up this new home for the AmeriNZ Podcast, I used FeedBurner to manage my RSS feed for iTunes so that I could host my podcast anywhere, and also so I could move it to a new host. Previously, when my podcast was hosted at Podomatic, I couldn’t change my feed address and I was stuck with their “service” (which is why I moved it).

Google bought FeedBurner in June 2007 and has been integrating the services ever since. As of February 28, they’re moving all FeedBurner accounts to Google accounts (there’s a way to opt out for people who want to burn their own feeds). The rest of us with FeedBurner accounts needed to set up a Google Account and transfer our feed(s) to it.

The completely Google version of FeedBurner has dropped some of the stats that used to be included because the stats are part of Google Analytics; you need an account with that in order to still get stats on site visitors and stuff. The good news is that there’s a lot more information available than FeedBurner used to supply. The bad news is that it took me several frustrating tries to get it to work for this site, though on the third or fourth try it did.

The trouble I had getting Google Analytics to work is similar to the trouble I’ve had getting various WordPress plug-ins to work, and the cause is the same: I don’t understand HTML. That’s why I used FeedBurner in the first place—I wouldn’t have the slightest idea where to begin to create my own feed.

Google’s online documentation for the change isn’t as clear as it could be, but it doesn’t really matter because Google’s transferring process works exactly as it’s supposed to. My moving process, granted with only four feeds, took less than two minutes.

It turns out there’s only a slight difference: They added a “2” to the feed address, which is now:

That’s the address to use if you want to subscribe directly to the same feed that goes to iTunes (doing that lets you opt out of iTunes if you want to use another service/RSS reader). The old feed should re-direct indefinitely, but anyone who uses it may want to update their subscription.

So, the process is complete and everything seems to be working. If you have any trouble accessing items in my feed, let me know.

I made a reciprocal visit to Peter’s They Don’t Know podcast where we talked about all sorts of things, including cars! If you know me, you’ll know how bizarre that is. It was a lot of fun talking with Peter for my podcast, and the fun continued on his. Just goes to show, you start interacting with people on the Internet and you may just end up with a friend.

So feel free to head over to Peter’s site to listen his latest episode and leave a comment there. Or here. Podcasters just want to to be loved, don’t you know… (and that’s officially the end of my making lame jokes out of the The Don’t Know podcast name, uh, I think). 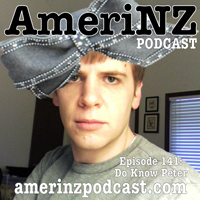 I was a blogger before I was a podcaster, and before that I was a listener and blog reader. I met today’s guest, Peter (aka epilonious) of the They Don’t Know podcast through blog/podcast comments and have gotten to know him since then. Our interactions have sometimes been, um, intense, but for him it’s been even more so with others. So I asked him why he does it, given those reactions. This leads to a wider discussion of blogs/forums and commenting generally, and how things can go wrong. Turns out, we do share some fundamental attitudes, which is probably one of the reasons we’re friends. That, and he’s wacky and fun.

Link for this episode: They Don’t Know