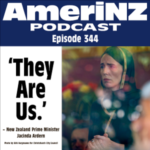 On Friday of last week, New Zealand was changed when terrorism arrived on our shores. I reflect on that day and the immediate aftermath from my perspective. This is a personal viewpoint, not a news report or news analysis—there are plenty of places that provide that. But for nearly a dozen years I’ve talked about good things and bad things that have happened in New Zealand, and this could be no different.

Important update: After I recorded and prepared this episode, the New Zealand Government followed through on its promise and will ban all military-style semi-automatic weapons and all assault rifles. I’ll have more to say about that later, but I applaud the move.