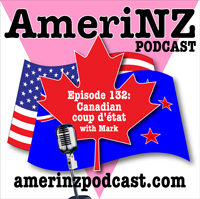 Today I’m joined by my e-friend, Mark from Slap Upside the Head, to talk about the current constitutional crisis in Canada. Some people have called it a coup d’état, but who’s fomenting the coup kind of depends on which side you’re on. Mark provides a lot of background to the current events, and I compare and contrast some things with both New Zealand and the US. It’s a wide-ranging discussion, and I know I learned some things about Canadian politics. We’re going to try and meet up again in the New Year to talk about how the situation is resolved—assuming it is!

Link for this episode:

The delicate role of the Governor General.

Joining me today is one of my “e-friends”, Mark from Slap Upside the Head, which is one of my favourite sites on the Internet (his motto: “Combatting bigotry the gayest way I know how”). Mark was last on the podcast on Episode 51 back in November of last year.

Canada is having in election in October, so we talk a bit about that, and also about the elections in the US and New Zealand, all of which are happening relatively close to each other. What’s happening with proportional representation in Canada? We also talk about the nature of political parties, in Canada and elsewhere.

Some Americans talk about moving to Canada if McCain wins. Is that realistic? We even talk about the controversy about the “Hockey Tonight” theme. Do you know what the national sport of Canada is? Yes, we Do talk about sports!

Links for this episode:

Mark’s last time on the podcast:
AmeriNZ #51 – Mark from Slap

Oh! Canada! It’s an extra long episode today, as I talk with Mark from one of my favourite sites, Slap Upside the Head. Mark is Canadian, currently living in Montreal. We talk about all sorts of things, like his growing up in Canada, and something of what the country is like. Are gay rights really better in Canada? What can the Canadian experience teach American activists? We fit in some talk about terrorism, the influence of right wing religionists, and even sports! Canada, the US and New Zealand all get some compare and contrast action.

Leave a comment or call my US listener line on 206-339-8413. And, you can always send an email to me at amerinz(at]yahoo.com. Join my e-mailing list to find out about new episodes as they’re released.

A couple Slaps we talked about:

It’s been a very busy few days since Episode 38. Among other things, I was a guest on CallBox7. I also made my first-ever guest post on another site, Slap Upside the Head.

Meanwhile, NZ and the US have taken small steps toward closer relations.

Update: Podomatic did something odd with the upload of this episode, starting the file again after about three minutes. So, feel free to skip the first three minutes to avoid hearing it again. It’s not often that the uploaded file turns out different from the finished version sitting on my computer, but it has happened before. Not my fault, exactly, but probably in keeping with my luck lately.

Update 2: Australian Prime Minister John Howard has avoided a challenge to his leadership of his party and will remain prime minister. Pundits say it’s likely that Howard will lead his right wing coalition government into the upcoming Australian elections in which he will face the Australian Labor Party under Opposition Leader Kevin Rudd. Opinion polls currently have Howard’s team running about 15 points behind the ALP.

Mentioned in this episode: