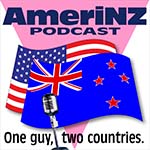 AmeriNZ #1 – You gotta start some place

What was I thinking?

I posted my first podcast—or first episode of my podcast, as the case may be (we’ll see…). It was intended to be a test recording, which I made last week, but I decided to go ahead and post it anyway. That way, I couldn’t put off doing it any longer. It also had some stuff that I didn’t really want to re-record. So, there it is, in all its rough glory.

I’ve been thinking about doing a podcast since before I started this blog, but I decided to listen to several before giving it a go. All the podcasts listed at the right of my blog provided some inspiration, some directly. I’ll talk about that in another post.

In the meantime, this blog will remain largely as it has been, but it’ll also be the home for the show notes for podcasts and show comments. Feel free to leave a comment, ask a question, whatever. I hope to post new episodes every 7 to 10 days, and they’ll always be announced here.

So, on with the show:

On this episode I talk about the Prime Minister’s trip to America, the thaw in NZ/US relations, life as an expat and having two countries to call home.