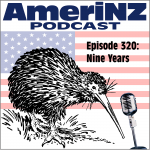 The second NZ Flag Referendum ended on Thursday, so I talk a little about that, though I’ll talk about it in more detail next time. In the meantime, below are links to two blogs posts I’ve written (so far) about the results.

This is my second podcast episode for March, which is nice, but it turns out that I’ve been posting two new episodes every month so far this year, which I think is a fantastic improvement on how things have been the past couple years.

The first actual topic today is the the Democrats Abroad Global Primary, the results for which have just been released. I talk about those results in a little depth, and I also blogged in more depth about it (link below).

The second NZ Flag Referendum ends on Thursday, and the number of ballots returned has been much higher than for the first referendum. In fact, as of yesterday, roughly 60% of registered voters had voted, with three more days to go. I tell you why I think that’s important

New Zealand’s next Governor General has been announced. I have no idea who she is.

Easter Weekend includes two public holidays, so this is probably the last episode for March. Maybe. Finally, some personal updates, including non-news from the Tooth Tales saga, and an update on things I’ve talked about before.

This is a short episode as I triumph over adversity. Well, unexpected technical problems. My voice is also a bit raw. But I was determined to record today, no matter what.

The first actual topic today is that yesterday was the 31st anniversary of the introduction of the Homosexual Law Reform, which was passed 30 years ago this year. I’ll be doing a special episode about the 30th anniversary later this year.

Today I posted my ballot in New Zealand’s second Flag Referendum. I voted for change. I also posted my ballot in the Illinois Democratic Primary. I explain how that works, and why I vote—but not how I voted. I talk about why that is, too. I also talk a bit about the Global Presidential Primary held by Democrats Abroad, which I didn’t participate in. An event in New Zealand was the first place where overseas Democrats cast votes in the Global Primary.

Then, a couple bits from the podcasting world. Unlike what Auntie Vera Charles has experienced, El Niño has gone pretty much as expected for us. Then, I talk a bit about a clip show on Pride 48. Daniel Brewer interviewed me on the latest show.

Links for this episode
A post I made on the AmeriNZ Facebook Page about the Global Primary event held in New Zealand
“Pride48 Clip Show – February 2016” – The episode I was on.