Today provided a good example of the realities of life in the Pacific: It’s a vast geologically active area, and people ignore that at their peril. Today proved to be minor for New Zealand, but it could have been much worse. After I recorded this, it was determined that dozens—perhaps hundreds—had been killed in Samoa, American Samoa and Tonga, and entire villages had been wiped out. They know first hand what tsunamis can do.

This is also school holiday time in New Zealand, and I talk a little about that, as well some technical issues that delayed my recent podcasts. Comments next studio podcast.

The next 2Political Podcast will be released soon, but won’t be posted to AmeriNZ Podcast. To subscribe, got to 2political.com where you can subscribe through iTunes or directly to the feed.

This episode was delayed due to some technical problems. It’s mostly unedited.

The healthcare reform “debate” in the US has been more like a schoolyard brawl, and most Americans are no more enlightened now than when it began. Yet polls show the vast majority of Americans want healthcare reform along the lines of what President Obama proposed.

Joining me for the live chat were by LurryDean, Larken and Steven in Wisconsin. We being by talking about where things are and where they seem to be headed. Daniel Brewer joins us to talk about the nature of how the insurance industry works, something that shapes the entire reform debate.

We end up talking about a lot of related topics—and a few not so related. I still need a sign-off phrase—email me your suggestions!

It’s possible that there won’t be a group show on Thursday, October 1 Americas/Friday, October 2 in New Zealand & Australia. Watch this site for more details.

Join us on for the group chats on Pride48.com for a wide-ranging discussion. The live chats start at 8pm Eastern North American time on Thursday (1pm Fridays New Zealand time). Check this amerinzpodcast.com for any updates.

It’s now been nearly two and a half weeks since my last “normal” AmeriNZ Podcast. But, things are back to normal (so-called) now. 2Political Podcast is now fully spun-off, so those episodes won’t prevent me from doing two AmeriNZ episodes per week.

In preparation for resuming a normal podcasting schedule, I update some things I’ve talked about (it’s easy for these sorts of updates to pile up). I start with an update on needed changes to NZ criminal law. Then, it’s on to why I won’t provide any immigration advice. The NZ Prime Minister, John Key, is in the USA and will deliver the Top Ten List on David Letterman. The new Auckland Council has been established by Parliament. 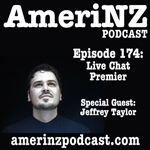 This is the premier episode of weekly chats streamed out live over Pride48.com. There were a few teething problems (such as some sound issues, like in the first few seconds); I’ll get them sorted. Some of those issues are edited out, but this is mostly as it happened. I decided not to split this into two episodes because the group chat carried on from the interview (thanks for the advice, Archerr!). Future episodes will be shorter.

In part one, I talk with Jeffrey Taylor, who had one of the first podcasts I ever listened to, “The Gay Expat”. Since then, he’s moved on to vlogging and other new media opportunities. So we talk about his former podcast, about Vlog Europe and VideoCamp SF.

From there we talk about some of Jeffrey’s political activities: Today he was appointed to the Interim Administrative Group of Restore Equality 2010, a statewide group working for a repeal of California’s anti-gay Proposition 8 in 2010. He talks a bit about what led him to this, and we also talk about the future and opportunities.

We also talk about the upcoming March for Equality, immigration reform and other bits and pieces. Related to all that, new technologies offer some unique opportunities to organise for equality, and we talk about that, too.

In part two, we’re joined by Steven in Wisconsin, LurryDean and Daniel Brewer for a group chat about some of the issues raised in part one, especially the National Equality March, marriage equality, DADT, ENDA, and GLBT equality generally. We talk about the national vs. local strategy, and some of the ways forward. Should we take what we can get or demand everything? It’s a wide-ranging talk about lots of things—too many to list!

Live shows will be every Thursday at 8PM (Eastern time in North America, 12 Noon Friday in New Zealand), and regular weekly episodes will normally be one hour. Future episodes won’t necessarily all be about politics, by the way. And, I’ll figure out how to host a group show…

Something is seriously wrong with WordPress and/or GoDaddy and I can’t make these links clickable. Sorry, but you’ll have to copy and paste. I’ll try updating this list later on. All better now. Sorry for the inconvenience.
Vlog Europe 08
NOH8 Campaign
Get Engaged Tour
VideoCamp SF
Restore Equality 2010
National Equality March – Oct 10-11, 2009
Courage Campaign
Take a Volunteer Vacation in Maine! Help protect marriage equality
Leaving Out Part of the Liebovitz Story (Terrance Heath’s post on Bilerico)

Get AmeriNZ Podcast for free on iTunes8

The premier episode of weekly chats streamed out live over Pride48.com (and recorded for later posting) begins 24-hours from now. The live show will be every Thursday at 8PM (Eastern time in North America, 12 Noon Friday in New Zealand). The premier episode will be two hours long, but the regular weekly episodes will normally be one hour.

The premier episode starts with a chat with Jeffrey Taylor, former podcaster, vlogger and American expat. All of this is directly related to the AmeriNZ Podcast.

Jeffrey is now working with prominent members of the Videoblogging Community to create a non-profit supporting web video artists, documentarians and investigative reporters, and will be speaking at VideoCamp SF (October 16-17). He’s also been active in the movement to repeal California’s Proposition 8 in 2010 and he’ll be attending the March for Equality.

We’ll talk about all that, and especially about the March and the 2010 effort to repeal Prop 8.

In part two (approx 9pm eastern, 1pm NZ), we’ll be joined in a live chat by others to talk more about these topics. Is pushing our agenda now a good idea, or should we wait? Could either the March or a 2010 repeal effort harm the GLBT communities? Or, do these offer a unique chance to advance equality? Can we accomplish anything with the nation fixated on healthcare reform and the economy? Or, does that make this the perfect time? What do you think?

Join us tomorrow for a live, freewheeling discussion.

Note: My Skype username is “amerinz”, which you’ll need to participate in the group chat.

This is the final episode posted to the AmeriNZ Podcast feed! Subscribe to the 2Political Podcast by clicking on the iTunes button at the bottom of this post, or directly: http://feeds2.feedburner.com/2politicalPodcast. Thanks for your support!

A few more housekeeping bits start us out today—including that we’re now recording roughly every ten days instead of two weeks. Then, after Jason’s Special Days, it’s on to today’s topic, healthcare. We begin with the president’s speech, then move on to the state of the debate. Along the way, Arthur delivers a small rant about healthcare, the debate and distractions; after that, you’ll understand where he’s coming from.

Visit our website, 2political.com, where, you can leave a comment, get the comment line number or our email addresses for the podcast. 2Political episodes will continue to be available through AmeriNZ Podcast for quite awhile, or you can subscribe directly through iTunes (link below).

I’m about to launch a new series of live AmeriNZ Podcasts on Pride48.com, beginning on Friday, September 18 at 12 noon NZ time (Thursday, Sept 17, 8PM Eastern US time). Don’t worry about calculating what that is in your local time—just go to the schedule page on Pride48.com and change the time zone to yours.

These new live shows will be different from the ones I’ve done before. They’ll be more topical—about politics, current events, culture, etc. The crazy shows will be back from time to time, but the weekly show will be a bit more structured. Each show will have a chatroom available so listeners can interact with each other, me and the others on the show. Each show will be about an hour long.

The group shows will be first come, first served or whatever; there’s a limit to how many people can be in a Skype conference, so be in early (you can email me in advance if you want to be sure to be part of the group). In the middle of the week, I hope to post the topics for that week so if it’s something you’re especially interested in you can be sure to be there.

The premier episode will be different: It’ll be two hours long, and starts with a special guest. Then, we’ll all take part in the group show (which should begin about 12:45 or 1pm NZ time, 8:45pm 9pm Eastern US). The following week it’ll be back to an hour.

So stop by for the premier episode and take part in any way you feel comfortable. This show will be whatever we make it together, so let’s have some fun!

We begin today with a few housekeeping bits, then Jason offers to rebrand the Republican Party—a sort of truth in labelling, you could say. Special Days are next, then it’s on to the topics of the day—the state of the campaign for healthcare reform, the crazy people and the extent to which the mainstream newsmedia has made things worse. We also talk about liberals’ impatience with Obama. Will the Republicans be able to capitalise on all this in the next election? The truth is, no one knows or can know this far away. The September 11 anniversary is this Friday, so we talk a bit about where things are now. That brings us back to Republican distortions.

Feel free to visit our website, 2political.com, where, you can leave a comment, get the comment line number or our email addresses for the podcast. 2Political episodes will continue to be available through AmeriNZ Podcast for quite awhile, or you can subscribe directly through iTunes (link below)..

Back in about ten days!

Okay, two things: This episode is EXTRA long, and it doesn’t end when you think (listen for my added special tribute at the end). After two weeks, I think you can allow me some extra time.

Today I tell you about our trip to Northland—our honeymoon. First up, I have some historical information for the date I actually recorded. Fast forward if you want. After that, I give the final (I think) update on the referendum I’ve been talking about. My main topic is our honeymoon in the Bay of Islands, Northland, New Zealand. Comments and email let me expand on a number of things—first, being an expat, and second, the upcoming AmeriNZ Live podcasts. A special tribute is at the very end—don’t fast forward Too much!

My take on the referendum results
A blog post exposing connections.
Voting results show christofascists are toothless in New Zealand.